THE STORY On a September morning in 1912, in the countryside of north Georgia a search party had been formed and was looking for a missing 18 year-old named Mae.  The beautiful white farmer’s daughter was found in the woods covered with leaves.  She had been raped, severely beaten, and left for dead.  Fear struck the little peaceful community because of the chilling brutality of the crime.  It was a violence that had never been seen before in a rural farming community where everyone knew each other.

A black teenager was accused of the crime, and this was the Deep South where blacks were lynched for just rumors of rape, or even whistling at a white woman.

But This Case Was Different…

This was one of the few cases where a white woman was actually savagely attacked and would later die.  It was also different because the people from the tiny farming area didn’t lynch the suspect who they knew as a neighbor boy.  Instead, they turned him over to the sheriff.  It would be a rare chance to see if a court in the South could hold a fair trial of an accused black attacker. 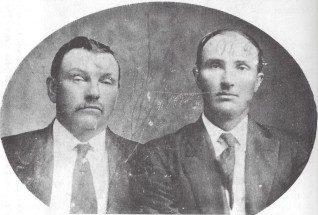 The sheriff investigated and five people were arrested for the rape; two black men, two black teenagers, and one black woman.  Soon, one of them would be lynched, and the others would have to fight to save their lives in court.  With an unexpected twist the case was finished in a dramatic fashion, but to this day it leaves researchers debating what really happened.

The Banishment The attack resulted in a terrible racial backlash.  Thousands of African-Americans all over north Georgia were threatened, houses shot into, livestock killed, and black churches were burned and dynamited.  It was the beginnings of the reestablishment of a group that had been banned – the KKK.  In the end it would be the largest banishment of African-Americans in U.S. history. The filmmakers investigate this case to find out what really happened, if justice was served, and to uncover the ongoing affects of a hundred-year-old crime.  They take on the accepted common local history and uncover the truth.  More than just a crime story, this is a film about why and how good people commit terrible sins against humanity and exposes how we commit the same errors today.

Leave a Comment or ask a Question Cancel reply